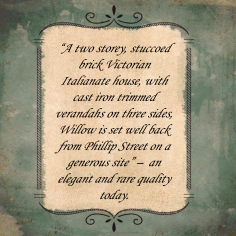 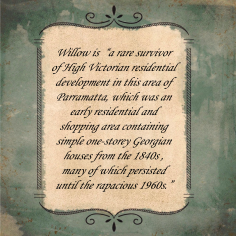 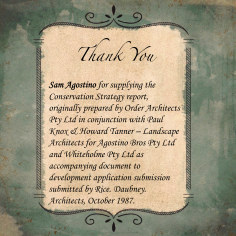 According to the State Heritage Register, Willow Grove is “of significance for the local area for historical, aesthetic and representativeness reasons. Built c.1870s, it is a good example of a Victorian Italianate two-storey villa, readily identifiable as part of historic building stock and strongly contributing to the streetscape in spite of its large setback, partly through its notable fence.”

The historic image below, dated c. 1886, is from the personal collection of Sam Agostino, whose late father Frank and uncle Michael Agostino were former co-owners of the stunning property. Though built as a grand, private residence, the property has mostly been used for commercial purposes throughout its history. It even served as a maternity hospital, named “Estella” or “Nurse Davidson’s Private Hospital” after matron and midwife E. E. Davidson. Other names associated with the property include “Westcourt Private Hospital” and “Aloha.”

In addition to being elegantly set back on a generous lot with a grand gated entrance, the grounds originally extended to the Parramatta River. However, Parramatta Council purchased that land to turn it into a carpark. Read more >>

Willow Grove is one of a number of heritage buildings nearby, including St. George’s Terrace further up Phillip Street and The Roxy. Collectively, these buildings contribute to the character of the historic townscape.

Of St. George’s Terrace at 44 Phillip St, the State Heritage Register notes that the group of terraces are “of significance for Parramatta LGA for historical and aesthetic reasons and as a representative example of modest Victorian period terraces constructed during an early wave of development in the area. The group presents as having a relatively high degree of integrity when viewed from the street and strongly contributes to the Phillip Street streetscape and the character of the Parramatta townscape, additionally in unison with other historic buildings near-by.”

It is not difficult to imagine how incredible the terraces would look when restored.

CLICK HERE TO READ ALL ABOUT THE FAMILY OF MASTER BUILDERS WHO BUILT AND OWNED ST. GEORGE’S TERRACE, PARRAMATTA